10 Reasons Millennials should ditch the 401k 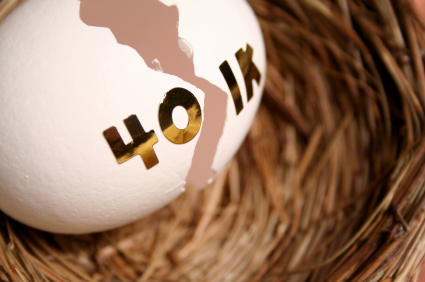 lennials tend to get the same tired, mainstream misinformation that trapped my generation into things like 401k and their cousins – the 403b, the 457, the IRA, and a few others.  That prompted me to provide some wisdom – acquired at the school of hard-knocks – that may help younger-types discover a better pathway to the financial outcome they seek.

Studies say millennials are great savers.  They’re smart – and they’re skeptical about traditional financial markets and financial advice.  As such, they want to know specifically why these plans are bad,  A perfectly reasonable question.  So here are my top 10 reasons to stay away from tax-qualified plans.

All so-called ‘tax-qualified’ plans are really partnerships between the plan owner and the government.  Because they only defer taxes, the government actually ‘owns’ a share of all qualified plan balances in the form of the deferred tax liability.

In a typical partnership, if the partners want to change the terms, they get together to discuss and revise the agreement by mutual consent.  In this partnership, your partner makes all the rules, and he does so at his discretion – without your input, and regardless of your objection.

Those rules govern loans, access, penalties, RMDs and other factors of financial consequence, and a one-sided partnership may not be the kind of arrangement you wish to be part of or knew you were entering into.

I’ll often ask people how much money they have in their tax-qualified plan, and get back an answer like, “I have $132,000 – it’s right here on my statement.”  But the truth is, not all that money is theirs – a large chunk of it belongs to Uncle Sam from the minute it went into the account.  Plan owners simply take on the role of ‘custodian’ of Uncle Sam’s money – and they will continue to do so for the rest of their lives.

Uncle Sam’s share depends on tax rates in effect when money is taken out – meaning his share is completely unknowable.  Who would ever enter into a partnership without knowing what share of the profits were theirs?  Yet, this is what qualified plan owners do every day. 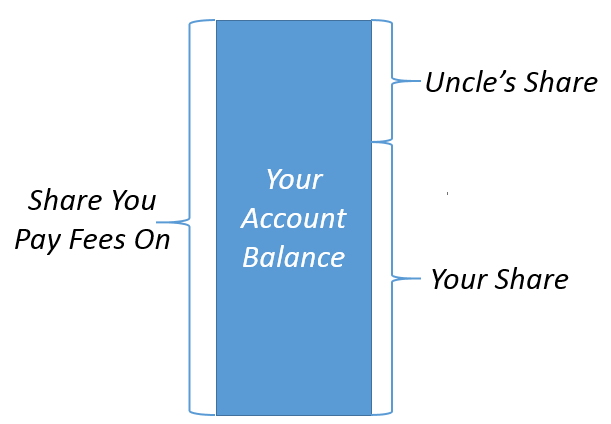 y paid in fees in their qualified plan (401k).  A stunning 70% responded that they weren’t being charged anything.  They’re wrong.  They pay fees and commissions on the mutual funds held in their accounts.  Often times those fees are both invisible and higher than they would be in funds that compete on the open market for investor money.

The erosive effect of fees and commissions is underestimated by all investors, but their effect is far worse in tax-qualified accounts.  Why?  Because while plan owners don’t ‘own’ all the money in their accounts, they do get to pay the fee and commission burden on all the money in their account – money that’s not theirs.  What’s more, they’ll continue to do so for the rest of their lives.

No one in the mainstream financial community is sounding this warning, but it is critically important that younger investors understand what’s in store for them.  Qualified plan savers will encounter all five retirement tax gotchas – and if they don’t discover they’ve been ‘had’ until they’re in retirement, there are no planning options left to navigate around them.  If you’re in your 20’s and 30’s you can avoid them all – and you can avoid them 100%.  What are they?

Not only can this take an extraordinarily large bite out of a retiree’s financial legacy, it will likely drive up the tax rate assessed on the recipient’s regular income as well.

Markets used to move up and down on real things – like ‘earnings.’  But today, geo-political events that are often unpredictable invoke wild fluctuations in markets.  Consider the most recent ‘event’ – the UK’s ‘Brexit’ vote, for example – which drove a 10% market correction almost overnight.

Not only are market corrections harder to see coming, they happen quickly, and recover slowly.  Besides, nobody likes to lose money – ever!  But the typical tax-qualified plan exposes the vast majority of invested money to the vagaries of markets.  Most, if not all the money in tax-qualified accounts is exposed to market risk.  And mutual funds ‘diversification’ provides little cover.  In the 2008 crash nearly all qualified plans lost about the same 40% that the market itself lost.

Want safety?  Most plans’ low-risk options leave little chance of even keeping up with even the rate of inflation.

Market risk is not the price of admission for growth potential.  Rather, steady growth with no losses wins the race, and today’s risk-free alternatives – which are not available in qualified plans – may fit the bill better.

Among the bright shiny objects that attract the public to tax-qualified plans is the promise of pre-tax contributions and tax-deferred growth.  It seems such an obvious benefit, few look any further.  But it is a complete mathematical falsehood when there are options that allow after-tax dollars to grow tax-deferred and to be taken out tax-free. 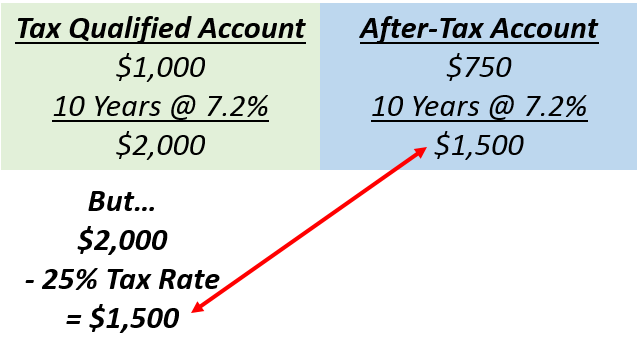 But wait a minute.  For the qualified plan investor to get the money out of their account and spend it, they must pay taxes on the full $2,000 since it has never been taxed in the first place.  If the tax rate in effect at the time the money is taken out is the same 25% we applied to our after-tax account, the qualified plan own ends up with the exact same $1,500 they would have under an alternative plan funded with after-tax dollars, growing tax-deferred, but accessible tax-free.  And just like that – poof – the biggest reasons to consider tax-qualified plans turn out to be total fabrication of the Wall Street Cartel.

Most company-sponsored plans offer a very limited selection of (mostly) mutual funds to choose from.  Third party brokers and plan administrators choose the available funds and fund families.  But when 86% of all funds under-perform their benchmark index, what are the chances really good fund options exist in most plans?

Many of these funds carry higher fees than other funds that have to compete for investor money on the open market.  After all, if plan owners don’t think the plan costs anything – plan administrators don’t think you’re looking – so many think they can get away with just about anything.

Perhaps the most under-appreciated of all financial risks is liquidity risk – the measure of how quickly and inexpensively we can turn an asset into cash.

Tax-qualified plans impose a great deal of liquidity risk.  With few exceptions, money in the plan is generally not available before age 59-1/2 without paying a 10% penalty – and that’s on top of the full tax burden on every dollar taken out.  Think of it like a 10% extra tax for accessing one’s own money.  It makes no sense at all.

Compounding the problem is that a lot of “life” happens before age 59-1/2.  There will be cars to replace, houses to buy, emergencies to fund, opportunities to be seized, college to plan for, and others events that only ramp up the liquidity risk of qualified plans.

Investors who think there’s a chance they’ll need to get at their money before retirement will find that getting it from their qualified account will be very expensive.

One option for those who need to access to the money in their qualified plans before retirement is to borrow it out.  Most employers offer a 401k loan option, and 30% of all plan participants have an outstanding loan balance.

But loans must be repaid.  And if borrowers can’t make payments back to their 401k payment for 90 days, the entire loan amount will be treated as a distribution.  The borrower will pay taxes plus the 10% penalty on the entire outstanding balance.  Participants who change jobs (or get fired) have only 60 days to repay the entire balance or they’ll face the same costly outcome.

Of course while money is borrowed from the plan, it is not growing and compounding – which can take a real toll on retirement plans.

But perhaps the most insidious consequence of qualified plan loans is that owners repay them with after-tax dollars – which – the minute those dollars go back into the plan – become fully taxable again.  It’s the ultimate double taxation.  Nobody plans to be caught in the loan trap, but it happens every day nonetheless.  And the horror stories of its victims should inform us all.

The third bright shiny object that attracts the unsuspecting to tax-qualified plans are those ‘free’ dollars employers lavish into plans in the form of matching contributions.  Let’s face it, who doesn’t like ‘free money?’

But more and more employers are playing tricks with their matching programs.  Some require participants to ‘vest’ in the matching funds – or credit matching funds on a particular day each year.  Leave before they’re fully vested – and poof – all those matching funds disappear.

Considering there’s a good chance the deferred tax liability will be greater than all the free money the employer puts in; and knowing about the Five Retirement Tax Gotchas and the fee burden plan owners will pay on money that’s not their – that free money may not be quite as free as it appears.

So What’s Your Option?

I said at the beginning – you’re a smart generation.  Apply that intelligence to your money.  Learn, listen, seek out experts who will tell you the truth.  In today’s market, there 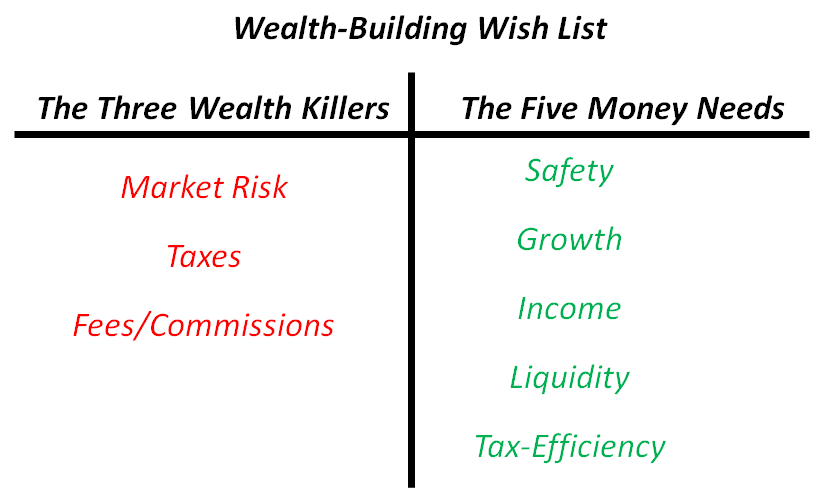 are products and options that are far superior to the now 45 year-old qualified plan – plans that are not one-sided partnerships.

Below is a blueprint worth considering.  Eliminating the Three Wealth Killers, and ensuring your money benefits from the Five Money Needs is a great place to start.

Keep saving – just be smart about what you do with your money and you’ll have a far better outcome than we – your parents’ generation.