Every sale in every Walmart store for an entire year adds up to $469 billion – making it the largest company in the world.  Yet Walmart will have to survive another 36,247 years before it can claim $17 trillion in sales.

Our national debt is $148,000 of debt per taxpayer right now – and climbing.  And that doesn’t count State and Municipal Debt – which adds another $3 trillion. 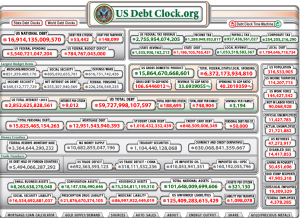 But we’re not done.  “Unfunded Liabilities” include Social Security and Medicare obligations that we’ve taken on – but have no idea how we’re going to pay for.  That figure is an astounding $125 trillion, and represents $1.1 million of liability for each taxpayer in existence.

Problem is, the $125 trillion in unfunded social security and Medicare is only real if 1) people die when they’re supposed to so we can turn off the social security spigot, and 2) if healthcare costs remain roughly where they are.

Neither is reality.  People are living longer – meaning more Social Security payments than planned; and in their older age, more medical services – that are going up faster than inflation – are being consumed by more people for longer periods of time.

Regardless of your politics, I hope we can agree that we need politicians – of whatever flavor – who will take seriously our need to get this under control and take corrective action to begin chipping away.  This is our future – and it’s being politically vaporized by the day.