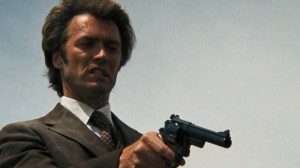 In one of the most famous scenes in movie history, Clint Eastwood’s legendary character – Dirty Harry – has caught up with his perp after a frenzied chase during which Harry Callahan had taken several shots and missed.

Drawn down on his now cornered suspect, Dirty Harry says:

“I know what you’re thinking. “Did he fire six shots or only five?” Well to tell you the truth in all this excitement I kinda lost track myself. But being as this is a .44 Magnum, the most powerful handgun in the world and would blow you head clean off, you’ve gotta ask yourself one question: ‘Do I feel lucky?’ Well, do ya, punk?”

It was a great scene from one of the greatest actors in history.  But what does it have to do with money and investing?

Just look at the last line again – ‘do you feel lucky?’ Equity markets are on a spectacular, (almost) six-year bull run. If you have money in the market, its’ been nothing but black ink since 2009.

The current (almost) 6-year winning streak means we’re substantially closer to the next “correction.” When will it come? Who knows? But it’s a mathematical certainty that a losing year is coming – and statistically – it can’t be far off.

And that leads us right back to Dirty Harry – and you. “Do you feel lucky?” Or – have you put a plan in place that will allow you to continue capturing the market’s upside – while protecting your money from its downside?

If you have – you can sit back, relax, and know that when the day comes – neither you nor your money will suffer as a result. If you’ve not – you’d better be feeling lucky. Just remember, ‘luck’ is not a plan.

Locking in the upside while locking out the downside is possible. You just have to know where to look.