There is NO Advantage to Tax Deferral 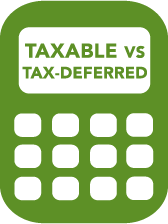 I’m struck by how many people are sucked into believing that tax-deferred accounts (401ks and the like) are better than after-tax accounts. News Flash: “there is no advantage to tax deferral.”

Given a choice of investing $100 pre-tax, or its $70 after- tax equivalent (assuming a tax rate of 30% here); most people will choose the pretax option assuming they’ll be far ahead in the long run.

But the truth is – there is no different – at least not in an environment of constant tax rates. 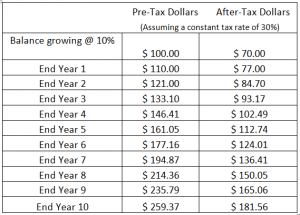 There are three exceptions to this rule:

It is this last exception that persuades people to elect the tax-deferred option when given a choice.

But earnings don’t have to be taxed at all. A Roth IRA for example exempts earnings from future taxes. But the Roth is plagued by three problems – strict contribution limits; most people don’t qualify for a Roth; and Roth funds are largely inaccessible without a penalty until after age 59-1/2.

An alternative is a properly structured cash-value life insurance policy. It too is exempt from all future taxation – making it a kind of “Super-Roth” – without the qualification limitations, contribution limitations, or liquidity limitations.

The cost of these policies is usually much less than the cost of fees and commissions in a typical Wall Street account; they’ll produce more income; and often include long-term-care type benefits.

Don’t fall for the mirage of tax-deferral – it isn’t all it’s cracked up to be – and there are better options out there.